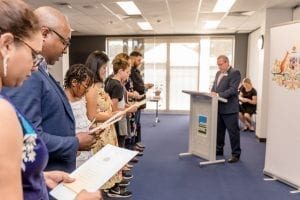 The Western Downs has officially welcomed its newest Australians at the Citizenship Ceremony as part of the Delicious and DeLIGHTful festival in Dalby.

There were 19 people making their pledge to Australia on Saturday 21st August with origins from Canada, the Philippines, the United Kingdom, China, India, Mauritius and Poland.

“One of the highlights in my role as Mayor is having the privilege of representing our country in this important ceremony,” he said.

“It’s fantastic to see how happy our newest citizens are at these citizenship ceremonies, it’s a great addition to a special weekend of multicultural celebrations.”

Saturday marked the third citizenship ceremony of the year, following those held on Australia Day and in May.

Dalby resident and future citizen Ligaya Sombrero from the Philippines was one participating in the ceremony with her family. “Living in Australia has been a great change and has provided amazing opportunities for my children,” she said.

“We’re all so happy to be a part of the ceremony and have members of many different cultures witness our pledge to be officially welcomed into the Australian community.”

Ligaya and her children was taking the National pledge after having lived in Dalby for seven years.

The ceremony took place in Anderson Park during the Festival.